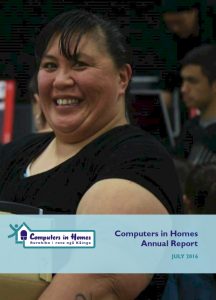 The 2016 Computers in Homes Annual Report is available for download from our Outcomes page.

I am pleased to report that, as in previous years, we have again exceeded our funded target. During 2015–16, we were funded to support 1500 families as well as 117 new refugee families through our Computers in Homes programme. By the end of July 2016, we had graduated a total of 1589 families and a further 161 were in training. This will bring our total graduates for the financial year to 1750 (7.5% more than the funded target).

We have also maintained matching support in terms of voluntary and discounted services for business and community partners, as well as secured additional new funding to expand the programme in the Gisborne District during 2016–17. 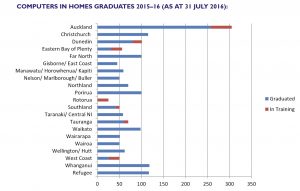 In 2015–16, we supported families in 20 targeted regions, all of which were identified in the 2013 Census as digitally under-served communities. The demand for the programme continues to exceed the funding available – we continue to give priority to families in decile 1 to 3 school areas in the most digitally disconnected communities, but we recognise that there are many families in higher decile areas who are just as digitally disadvantaged.

Many of these families are in isolated rural communities and this creates an ongoing challenge in providing affordable internet connections. Census 2013 revealed a total of 62,000 families with dependent children without internet connections in their homes. We believe this represents around 20% of all school-aged children. Since 2013, Computers in Homes has supported over 5000 families, but many children are still missing out. 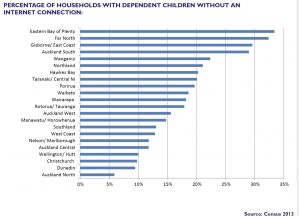 The Government has agreed to continue their support for Computers in Homes programme at the same level of 1500 families for the 2016–17 year and at an increased level of 130 for refugee families. However, while we expect the refugee programme to continue in future years, the Ministry of Education has made it clear that the mainstream Computers in Homes will not be funded in its current form beyond July 2017. We have been pressing government ministers and officials for some years to scale up the existing programme to at least 5000 per year to create equitable learning opportunities for students. We were encouraged by the results of the 2015 external review carried out by consulting firm Martin Jenkins.

The Government has also made clear its commitment to a social investment approach in supporting initiatives that target ‘at risk’ or disadvantaged families. The first question to answer is whether the profile of the families being supported by Computers in Homes matches the profile of families identified by government agencies such as the Ministry of Education and the Ministry of Social Development. We think it does but we need to be sure, so we have already commenced a profile mapping exercise. We then need to ensure our programme is directly addressing the educational and social needs of these families and where possible measure what difference (if any) Computers in Homes is having.

We are excited by this opportunity to integrate Computers in Homes into mainstream government programmes and we believe this could provide us with the pathway to achieve our goal where all families with school-aged children are digitally connected and enabled. 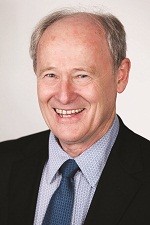 The full report can be downloaded from our Outcomes page