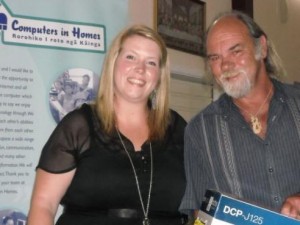 Merv Jury is a sculptor and carver who has lived in the small town of Granity on the West Coast for 30 years. His granddaughter encouraged him to register for Computers in Homes so she could share her learning with him, but he was initially reluctant. Merv says 6 months ago he would have shunned anything to do with technology. He ended up being one of the star students on the course, winning a printer for his story on the impact the experience has had on his life.

Recently a collective of West Coast artists met to discuss setting up a website to showcase their work and promote their businesses to tourists. Since completing the Computers in Homes programme, Merv now reports that he feels competent to be part of these meetings and is proud to be able to understand the language of technology. He is looking forward to being an active participant in promoting his work via the internet.

Merv continues to sculpt from home, experimenting with raw materials that are lightweight and easily carried by travellers who visit his studio.  Merv’s CIH computer sits on a desk which reputedly once belonged to Richard John Seddon, truly blending the centuries in his business on the West Coast.